Wrench night went - okay. The cranks and bottom bracket came with a lot of extra spacers and shims for different-sized shells, and no labels or instructions, so it took awhile, but we got those sorted and the cranks eventually installed just fine. 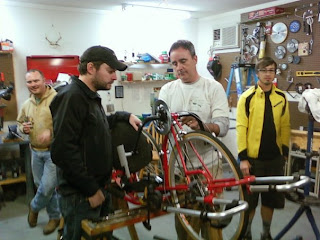 The LBS I ordered the new brake levers from last week apparently decided that when, (after some research), I specifically ordered a pair of "Dia-Compe Tech 77 Straight BMX levers with a 7/8" hinged clamp" that what I REALLY wanted was a set of "Dia Compe Model X Aero Road levers". Doom on me, I didn't check to make sure, hence I didn't have the levers to install last night. I did get to spend a significant amount of time trying to figure out the best way to install them when they DO get here next Thursday, so I'll be ready and get them on when they're in and the job will be done.

To the credit of the local bike shop in question, they did send one of their better wrenches out to help with the work. He knocked a good bit of cussing and head-scratching out of the bottom bracket installation, and they're donating the levers when they come in, to RollAid, so there's no bad feelings there - They're still an awesome shop.

We tried installing a single brake lever on the vertical tube under the bottom bracket shell. I've seen some handbikes set up like that, and it would be an ambidextrous way to mount the brake.

The complication with that is that (1) I decided not to put the shifters on the handpedals and leave them on the downtube so there's not much room for the brake lever and (2) that tube is a 25.4mm tube and I can't find a good lever with a clamp that'll fit. What I'm gonna do is put the brake levers on the sidebars like on this bike. Since the bike in the picture has two brake calipers and mine has one, I'll have to use a cable doubler to run cables from both brake levers to the single caliper.

I decided not to mount the shifters on the handpedals and leave them on the downtube so that the rider can shift either derailleur with either hand, the cables won't get wound around the handpedals, and downtube shifters are vastly more durable and forgiving of error than the STI or trigger shifters I'd planned to put on. Hand-mounted controls would be cooler, but ultimately less useful on a bike with multiple riders. Pics as soon as I get my paws on them.
Posted by David Hill at 10:18 AM

Can we use one of the hand cycles for a warrior to compete in the Capital of Texas triathlon? It will be on Memorial Day.
Thanks!
Woody

We're not keeping the handibikes. Is the rider you have in mind a patient?

We've told the donors that their handcycles were going to BAMC/CFI for the use of the patients there. The plan is to present them in Austin to a BAMC representative, then let them do with them what they will. If you make the point to BAMC that WWP provided the tax incentive that made the donation possible, that would make a difference, I'd think.

added: ...but I'd be damn happy to know that one would be used in the tri... maybe we should sponsor Barlows to go down and run it, too.