It's about time to shift the planning apparatus into climbing gear. Who wants to get together for lunch or dinner to get the ball rolling?

Lunch is easier for me in the Mid-Cities/Grapevine/Irving vicinity, but given enough notice, I can pull off dinner about anywhere.

For that matter, I live in SW Fort Worth, about 8 miles from where we started the last trip. I could burn some meat if y'all bring sides.

OK, I have to go to a Sun wedding in Johnson City the end of Oct. I was hoping to leave Friday night, ride for a few hours, camp, then ride Sat most of the day and have the wife pick me up on her way down. So I thouhgt what a chance to scout a route. I know we talked about leaving from the Dallas area this year. Any Ideas, plans, thoughts, etc?

I used the new google walk mapping from the VA in Dallas. Route doesn't seem too bad may need some tweeking.
http://tiny.cc/AGC1p
Posted by Tate at 2:56 PM 6 comments:

Another BIG Heart Donates a Handcycle for the Wounded Warrior Project 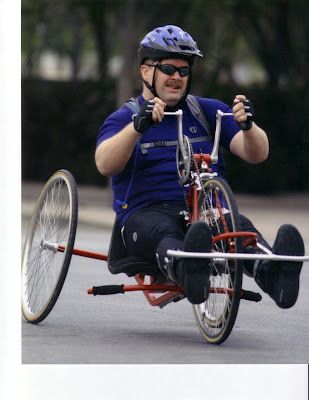 Not long ago, on a Recumbent forum (rbentonline.org), someone posted a Freedom Ryder Handcycle for sale for a friend. I asked if they could get me in touch with the owner, with the idea that if the price was reasonable, we could get the money together and bring the bike with us to San Antone next spring.

I got an email back from the owner of the handcycle, Doug Exum. He had discussed my proposal with his wife, and had a change that he wanted to make. He wanted to donate the bike!! As part of the donation, there are a few upgrades that Doug would like to make to the bike, and I agreed that we should cover the costs required. There are a few little things like cables and such that we'll have looked at, and the handcranks themselves will be upgraded. They are currently close together, and we'll be upgrading them to the ones that are shoulder width apart. Doug has done all the groundwork, and Mike Lofgren of Freedom Ryder has agreed to donate the cranks themselves. Bear in mind, this is TWO sets of cranks, one for Doug's bike and one for the one David got for us!! We'll just need to cover the cost of the chainrings. So the total cost for Freedom Ryder will be roughly $300. Pretty darn good for 2 sets of cranks and all chainrings. The smaller stuff will be taken care of by JD at Richardson Bike Mart. He has agreed to donate the required labor, we'll just have to buy the parts.

David and I have met with Doug to discuss the handcycles and generally shoot the breeze. He's an easy going guy, and is planning to ride with us in the spring on his new handcycle. So to Doug, thank you so much for your generosity. Let's all welcome Doug to the group and thank him for what his selflessness will do to help out our wounded vets.

Folks, I'm building a new bike. Dave mentioned that I should put up a list of the parts that I still need just in case a deal comes around on ChainLove or somewhere else while I'm asleep during the day. Here's the list:

UPDATE: I have the saddle, post and bars now. Just ordered the stem today.

If you see any of these things on clearance, give me a shout @ two-one-four, seven-nine-four, three-zero-one-five.

Who's coming? I think Tate's in Montana, but surely one of you clowns is gonna come and help me drag Rod for a metric, right?

Don't forget, Gary Sinise and the Lieutenant Dan Band will be playing, PLUS it's Grapefest in Grapevine that night. A good time will be had by all.